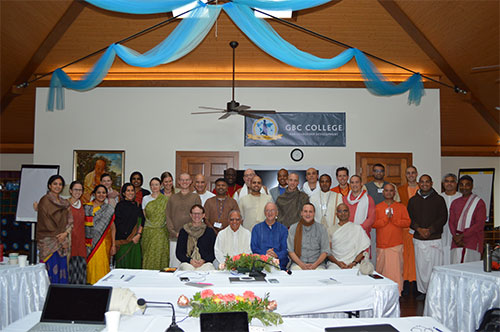 The GBC College for Leadership Development finally opened its doors in North America on 24th October 2019 after having started Zonal Supervisor training around the world since 2015—five cohorts of leaders in India, one in Russia, one in Latin America, and one in Central Asia.

The earnest desire of the NA GBC Council, especially Kuladri dasa and Praharna devi dasi, and teamwork of the GBC College core team—Gopal Bhatta dasa, Kaunteya dasa, Gauranga dasa, Bala Govinda dasa, Lalita Manjari devi dasi and Rupanuga dasa—over the past two years culminated in this 17-month training program that started with its first residential session in New Vrindaban, West Virginia, USA. The Council also offered to cover 50% of the cost; the other 50% is borne by the students.

The New Vrindaban team lead by Jaya Rama dasa and Mahasundar dasa, under the guidance of Jaya Krsna dasa, who is currently enrolled in the GBC College in India, made a generous offer to host the two 13-day residential sessions for free, at no cost to the students or faculty. Bhakta David and his team transformed the newly built yogashala into a high-tech classroom, where the daily sessions are held as seen in this video (courtesy of Bhakta Braelyn):
https://drive.google.com/file/d/1Zgvd2Y75O6w9ebFt52eIItKFPEIWTesw/view?usp=drive_web

The twenty-five leaders undergoing training are hand-picked by their respective GBCs and vetted by the GBC College Admissions committee. Of course, we are not the body, subtle or gross, but this is the most diverse group that the College has trained thus far—in terms of age, education, experience, generation, ethnicity and gender. Here are some photos of students and faculty interaction in the classroom (courtesy of Bhakta Braelyn):
https://drive.google.com/drive/u/0/folders/15PmrlnrLeBHs-YDbDoIQKL7CT4ESFMCS

The training program in USA will run for 17 months with three complimentary delivery methods as seen in the schematic below:

Requesting your prayers and blessings for a successful execution of this training program.
Thank you. Hare Krsna!